VOICES, Inc., is a nonprofit organization that documents Tucson’s community stories and inspires individuals to explore themselves and their connection to place. Join VOICES, Inc., for a fun and highly interactive creative adventure using beautiful cyanotype photographs as our visual muse as we play with words to create poems in fast-paced time bursts. The cyanotypes, created by City High School students in our wet darkroom photography program, are blue-toned photographs that are both vibrant and haunting, clear and abstract – fertile ground for imaginative word play!

Come together with the community to celebrate all the ways we’ve reimagined Emily Dickinson this fall. Performances include “Hope is a Story that Soars,” a 30-minute multimedia presentation by Stories That Soar (inspired by 16 pieces of writing submitted by the community), an Emily D poetry slam by Logan Phillips and TYPS, performance by musician Daniel Slipetsky, and a reading of Dickinson’s poems in Spanish by fabulous high school poets Sam and Alma. Plus, additional presentations by other youth and community members!

NOVEMBER IS GONNA BE WARMED UP! City-wide competition! Calling all poets, writers, rhymers, coffee junkies and spoken word lovers for your words, dreams, applause and screams. Tucson’s hottest microphone open to all youth 18 & under. Cash prizes!

“Mickey Randleman has been slamming for six years in the Tucson community. She has represented the Ocotillo Slam twice at the Individual World Poetry Slam, and as a team member at three National Poetry Slams (including two epic road trips – Tucson rocks a mix tape). Her poetry/personality was once summarized as, “She will rip out your heart, fold it into a lovely origami snowflake, then shove that down your throat.”

At BENTLEY’S 1730 E Speedway
near the UofA, across from McDonald’s, extra parking behind the building and in the UofA lot on Cherry & Speedway

The Every Voice in Action Foundation, Bentley’s House of Coffee & Tea, UA Poetry Center, Tucson Pima Arts Council, the Arizona Commission on the Arts, and the National Endowment for the Arts. 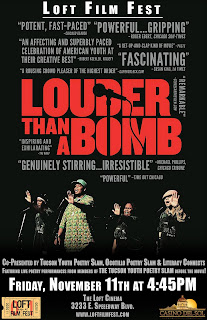 (Sherwin Bitsui had to postpone his TYPS feature due to a family emergency.)

at BENTLEY’S 1730 E Speedway
near the UofA, across from McDonald’s, extra parking behind the building and in the UofA lot on Cherry & Speedway 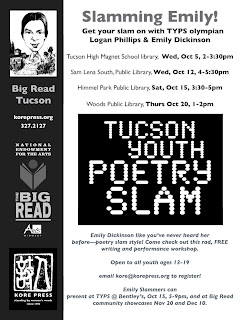 Read more about the Big Read project at Zócalo Magazine.

Brought to you by the NEA Big Read, Kore Press, and the Tucson Youth Poetry Slam. 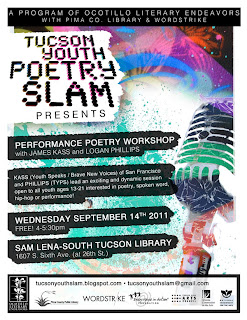 This will be an exciting and dynamic session open to all youth ages 13-21 interested in poetry, spoken word, hip-hop or performance! FREE!

The workshop will be co-facilitated by LOGAN PHILLIPS, coordinator of the Tucson Youth Poetry Slam.

The Tucson Youth Poetry Slam is a program of Ocotillo Literary Endeavors, this workshop is presented in collaboration with Culturestrike and the Pima County Public Library. 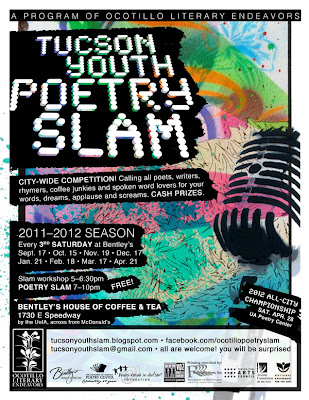 Featuring slam champion CARLOS CONTRERAS, coming all the way from Albuquerque, NM just to be at the TYPS! Hosted by Logan Phillips & Sarita Gonzales!

at BENTLEY’S
1730 E Speedway, near the UofA, across from McDonald’s
extra parking behind the building and in the UofA lot on Cherry & Speedway 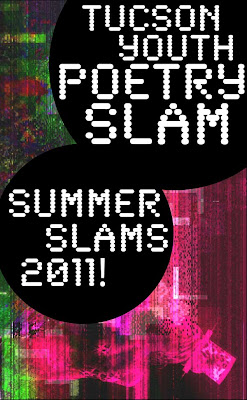 The TYPS keeps on keepin’ on straight through the summer! As of May 2011 the TYPS will now be held every 3rd Saturday of the month. This summer we are introducing youth co-hosts and some very interesting featured poets! Don’t miss the hottest thing going on this summer, the ¡TYPS!

TYPS COMMITTEE 6:00-6:30pm
Come decide how the TYPS should be run & volunteer.

Bentley’s House of Coffee & Tea
1730 E Speedway
is by the UofA, across from McDonald’s on the south side
extra parking behind the building
and in the UofA lot on Cherry & Speedway

Made possible with the generous support of the UA Poetry Center, the Every Voice in Action Foundation and Nuestra Voz.

Nineteen of Tucson’s best youth poets came together for the first-ever all-city championship on a beautiful sunny afternoon! The event was the culmination of the Tucson Youth Poetry Slam’s (TYPS) inaugural 2010-2011 season, and also the grand finale of the UA Poetry Center’s “Young at Art” festival. Seven different high schools from all sides of the city were represented on the mic. Months in the making, the championship showcased the amazing power and positive energy of the TYPS for all to see.

Video of the entire event is here, part of the TYPS YouTube channel. 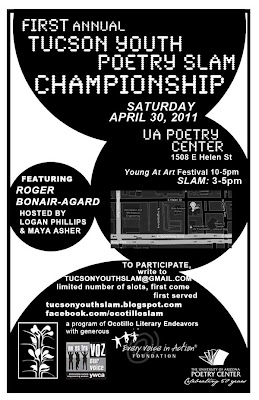 A program of Ocotillo Literary Endeavors in partnership with the University of Arizona Poetry Center:

The TIME has COME!

Over 20 of Tucson’s best poets 18 & under throw down in a championship poetry slam! Judges picked from the audience! Cash prizes totaling $200!

Featured poet: from Trinidad by way of Brooklyn the renown poet and performer ROGER BONAIR-AGARD!
One of the most well-respected voices of the spoken word movement! Listen to a NPR interview with Mr. Bonair-Agard here.

(Note: Patricia Smith was previously confirmed to be our feature, but had to cancel due to circumstances outside her control. We wish her well and hope to see her soon.)

Part of the UA Poetry Center’s YOUNG AT ART festival, more info on the festival’s other great events here.

Made possible with the generous support of the Every Voice in Action Foundation, the YWCA Racial Justice Program and Bentley’s House of Coffee and Tea.

POETS SIGNED UP TO COMPETE: